This page contains all the known glitches, stuff not covered by other categories and information on the Easter Eggs (which are specials, references to Strike Force Heroes 1 and "secret" details that can be found in the game).

If you've found anything new, feel free to add it.

Pausing during a reload

Pausing the game when someone (you or anyone else on the screen) is reloading his weapon will result in hand's reloading animation being repeated over and over until you unpause. However, if you exit the tab when it is paused and go back to it later, the constant reloading would stop.

Disposal Beam of the Isolation map and both instances of Death Laser (the red homing circle in Mission 14 and the floor laser in Mission 15) continue to tick down even when the game is paused. Thus, when either of hazards appear, one can simply pause and wait until they expire. During a pause they will not deal any damage, even if you stand right in the middle of the big laser.

If you choose a visible attachment for a sniper rifle (e.g. ACOG, Laser Sight), it'll glitch things up. On preview, the standard scope wouldn't be shown even if your attachment shouldn't replace it (e.g. while ACOG does have to replace the default scope because it's another version of a scope, Laser Sight is mounted on the barrel and has no reason to do anything with the scope), and in-game it won't show your attachment chosen, just a sniper rifle with its default scope. This is because the standard scope is technically an attachment too (have you noticed it's exactly same on all snipers?), and when you choose another attachment, a conflict happens and, since only one attachment can be chosen at a time, one of them has to vanish. Apparently usual attachments have higher priority over the standard scope on the preview, while it's vice versa in the actual game.

Despite your attachment chosen not visually appearing in-game, it actually works and gives all the effects it normally would. 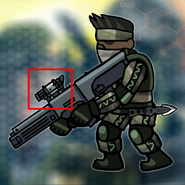 With a Thermal, things seem right 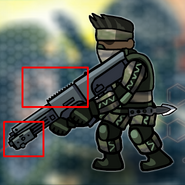 With a Laser Sight, the standard scope disappears for no reason 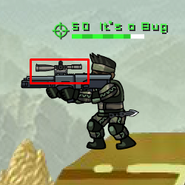 And in-game none of those attachments show up. At least the scope is there

When you buy or sell an item, a dialogue appears, asking for a confirmation of requested action. In the center of it it shows a picture of that item and its stats. The glitch happens when you attempt to buy or sell an item by quickly moving the cursor onto an item and click on it (or its Sell button) before the pop-up stats window appears. If executed correctly, the confirmation dialogue will not show item's picture. This glitch is only visual and has no impact on the economy — with or without the picture, the item will be bought or sold like it was supposed to, and next time you hover the cursor over it, it'll show its stats just fine.

No Sweat VS forced suicide

When these two things meet, a conflict of interest happens, and No Sweat comes out as a winner. That is, No Sweat breaks suicide zones and lets you walk through them freely.

However, many suicide zones have a "Plan B" that gives you rapid medium damage from one of other characters in this match, so it isn't blocked. In this case, the weapon is claimed to be Death Laser — that one you can see in the last Campaign missions. And even this damage can be avoided by jumping continuously.

A RPG with a sheep

A Sheep Cannon with an RPG's rocket

A Sheep Cannon with a Stinger's... nothing

In health bars above soldiers' heads, armor and health are shown completely out of proportions — it displays that soldiers have less armor and more health than they actually do.

How it should have been displayed in this case, approximately.

How it should have looked in this case.

For whatever reason, the Bizon, the P90 and the 1216 lack magazines in the soldier preview, and in-game. This seems to affect weapons with an "odd" magazine, as these weapons have sideways clips as opposed to the normal clips that other weapons have. This may be why this bug targets them in particular.

In inventory, all looks right 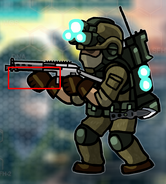 In preview and in-game, all looks wrong 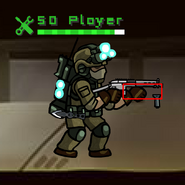 And with a visible attachment it looks even more wrong 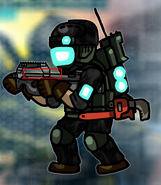 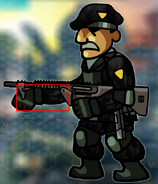 Freezing is intended to decrease fire rate, not damage.

Zapping is intended to decrease damage, not fire rate.

Notice: You'll need a self-damaging weapon.
(On the main part of the map, the cloning tube at the top can be used instead.)

In mission 14 of Campaign, you are supposed to first walk up to Dex (who's behind an invisible wall) and talk to him, and then the mission truly starts. Actually, this isn't even necessary to complete the mission! The point is, if you manage to kill yourself before talking to him, you'll get respawned in a random spot on the map. If you commit suicide enough times, you will eventually spawn behind Dex. Then if you kill him and commit suicide, you can fight him one on one to win the match! Though there's still a chance that any of you would spawn behind the wall, so you better have a wall-piercing killstreak (such as Wall Hack for Sniper and Tesla Coil for Engineer) if Dex is thrown there, to avoid having to kill yourself again.

One more thing to say is that things will get really strange if you go to where you are supposed to talk to Dex — but none of these would damage your save file or anything, so feel free to do so and enjoy the glitches.

A large part of this is only a theory and it may or may not be true, but so far it seem to work.

A bug haunting the whole Raze & SFH series, due to shared game engine. Any non-insta-hit projectiles, such as rockets, deal "double damage" when fired at point blank range.

It seems that the very first frame such a projectile is created, it's actually created twice, and its "clone" is supposed to vanish next frame. But if projectile(s) happen to hit a target the very first frame they are made, the second projectile never lives long enough to be silently removed, forcing both of them to deal damage (and push bodies, and make sounds, and everything else), resulting in double damage-like effect. Due to where the projectiles are spawned, the only way to make them hit something at frame 1 is to walk inside someone or something, be it a living enemy, a corpse or a turret.

If you walk up into someone who has a, say, RPG, and then swing a Katana or a Reflection Beam and reflect both rockets, there's a chance that you would actually see two rockets flying away at slightly different angles. Although the explanation above would logically make this impossible, it doesn't. A possible reason of things going this way is that when a projectile gets reflected, it becomes a completely new one, changing many of its attributes (such as who fired it), up to a point where it can no longer be recognized by the mechanics that were supposed to remove the copy projectile. 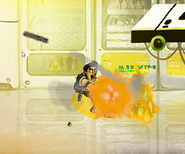 One of two grenades got reflected back to sender and exploded, while the second one has flied away

Same, but with homing rockets

There's a rare bug/glitch that suddenly blocks most of movement input, resulting in your character (or any bot — it can happen to them too) running/sliding in one direction, forever. In this case, you can't walk to anywhere else, and can't jump either, but can still crouch and shoot and do anything else. Exact reasons of it happening are unknown; possibilities include a flaw in climbing mechanics that leads to not unlocking the controls after climbing onto an obstacle. It's most often bumped into when dealing with an object such as a small crate. If the glitch happens, get killed or restart the match and it'll fix itself. The glitch is also present in SFH1 and SFH3, while Raze series seem to avoid it, quite possibly due to lack of climbing.

A similar glitch, common amongst Flash games and games in general, involves holding a button and then taking the focus away from game's window (by clicking outside of it, or Alt + Tab, or a sudden pop-up notification, or something else), sometimes resulting in a repeat of requested action (like running in a direction without actually holding the corresponding button, or shooting without actually clicking). Unlike the glitch above, it doesn't block anything, and can be fixed by simply pressing that button again.

On slant terrain such as stairs and ramps (or any not perfectly horizontal floor), Throwing Knife can sometimes stop moving for no logical reason. See the pictures for a visual illustration. Since the knife is not supposed to get stuck anywhere and instead should bounce around, it is assumed as a fault of knife's physics.

A fairly simple bug, this bug can be triggered by simply switching from a character that has a weapon equipped with any attachment onto a General equipped with Magnums. The left Magnum will have the proper attachment, but the right will have the attachment of the character you swapped from. This does not affect the weapon in any way; the bonuses of the equipment you swapped from will not be applied, and the bug will be cancelled as soon as you either enter the shop, the inventory, or simply leave the "Soldiers" menu.

If an AI runs out of ammo and has a melee weapon equipped (Such as Jyn), they will constantly swap from the melee weapon to the ranged weapon whilst trying to fire the main weapon at any visible enemy. Not only is the constant, rapid clicking horribly loud and annoying, but this tends to slow the game down. The glitch ends when the AI gets killed, or happens to run into an ammo box.

If you were a class with a different weapon than an SMG upon starting the Station Repair campaign level, the UMP you possess will visually have the attachment of the weapon you had on your class before you started the level. (I.E, if you were a Sniper with a rifle that had an ACOG on it, it will appear on your UMP when you start Station Repair). Whether or not the attachment actually affects the weapon appears entirely random.

Community content is available under CC-BY-SA unless otherwise noted.
Advertisement